Can I go back to using a Mouse? – 3Dconnexion CadMouse #3dconnexion #SOLIDWORKS

For most people that would not be a particularly big statement!  However for me, it is quite momentous!

Some background.     For those who don’t know I’ve been a long term user and advocate of Logitech Trackballs.  I first started with a Logitech Trackman Wheel around 2006 before switching to the Logitech Trackball M570 when first release in 2010.  I’ve gone though a few over the years.  I tend to rotate them.  I buy a new one ever couple of years for work, to use with my desktop. The older one then goes into service with my laptop!

I first moved away from using a conventional mouse partly because of progressive arm pain!  I suggest nothing new for those who spend weeks on end, day after day (10-12 hours a day) working with CAD programs.  Carpal tunnel & elbow pain tend go hand in hand with those who use CAD applications.

At a similar time as moving to a Trackball I also purchased my first 3Dconnexion product.  A  3D Mouse SpaceNavigator.  To be perfectly honest over the years I’ve used the SpaceNavigator progressively less on a daily bases with SOLIDWORKS.    This is due mainly because of the Logitech Trackball ability.  Along with an evolved use of SOLIDWORKS that sees a combination of left hand keyboard shortcuts, including the “S” (and now “D”) keys and “Mouse gestures”.  That’s not to say I don’t use my SpaceNavigator with SOLIDWORKS.  I do like to sit back and overall review my models using it.  Outside of SOLIDWORKS the SpaceNavigator is an ideal product for scrolling along Excel & Twitter columns.  As well as web pages and pdf documents!

For those of us who use the Logitech Trackballs M570 with SOLIDWORKS and computers in general, know of it advantages.   So why now after all these years would  I consider going back to a conventional mouse?  And could the 3Dconnexion CadMouse convince me to do so? Or more importantly could I adapt to the CadMouse?

A question of Why? It has come down to a collection of small reasons.  With the introduction of Windows 10, there has been some small issues inside of SOLIDWORKS.  None I can prove to be directly related to the M570 but it couldn’t be ruled out!.  Occasionally (randomly) when you would scroll over an edge of a model it would appear to select the edge and then think about it!  What appeared to be minutes but it real terms, would only be 10seconds or so!  What lead me to thinking it was the M570 (or its drivers) was when I handed on my computer.  I had similar issues with my new computer but not with a mouse on my old one.

The Logitech Trackballs M570 also do tend to have accuracy issues after a few year!  The scroll wheel/ middle button get effected.  Sometime they just need dismantling and a good clean. Eventually the answer is replacement.

Then there is the other designer who I work with.  Who has been making overtones about wanting a new mouse!  Combine these and a few other similar small reasons and I needed to, at least look and evaluate something else.

The decision to try a conventional mouse was far more difficult than the selection of the CadMouse itself.   Really it wasn’t a hard decision.  The 3Dconnexion CadMouse has been out for just over two years now.  Reviews have been good.  Although I have only had limited use of a CadMouse at the last couple of SOLIDWORKS Worlds, it felt a good product.   Personally I have always had a liking for 3Dconnexion products!  They have that wonderful understated look and feel of quality about them.   There is a certain weightiness to their products and a correct feel with the materials they use.  Then there is the attention to detail in the products,  It is the little touches that differentiates them from the pack!

Whilst the look of the product may be less important than the feel or it’s ability to do the job, for me it does play a signification part of the selection process.  The CadMouse has a “family” resemblance to all other  3Dconnixion products.  That familiar three black and brushed stainless steel appearance! I like both the practicality and the look of the braided cable. 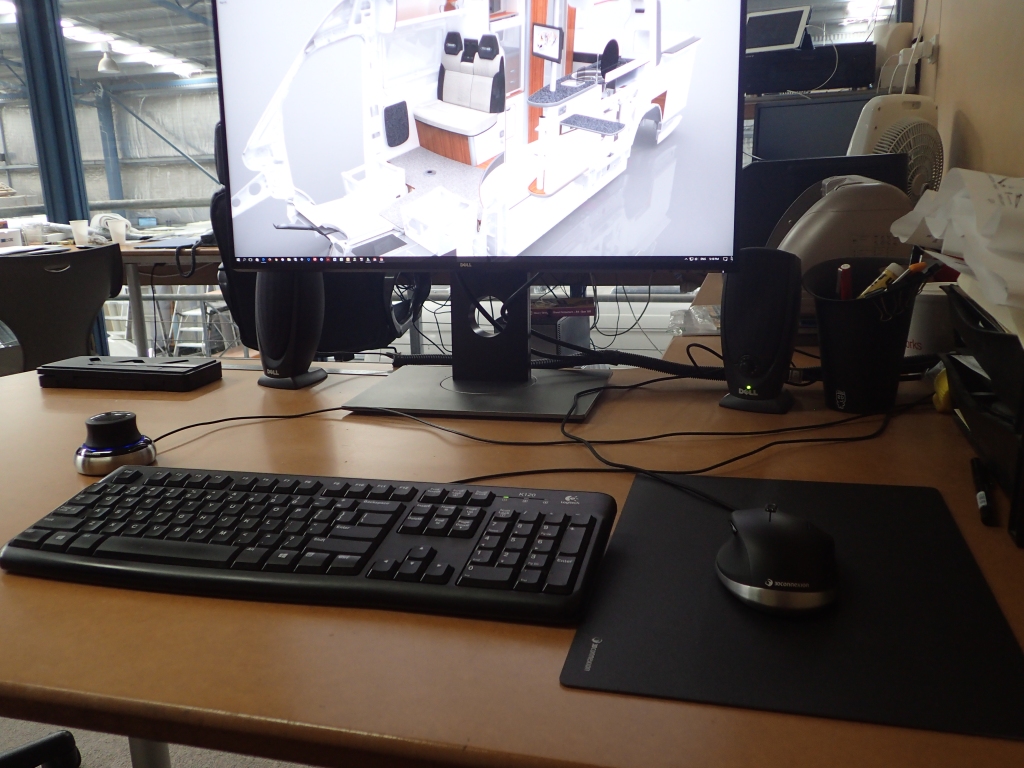 3Dconnexion product drivers and settings are controlled by their 3DxWare application.  As it is already installed on my computers, once the CadMouse was connected it shows along with my other 3Dconnexion product.

At this stage I’m still very much in the experimental stage with how I set up the device.   Again I confess to not being a big user of the additional available button with both my SpaceNavigator or my Trackball.   I’m not sure if that makes me more inefficient or not.  At this stage I feel it is better that I concentrate on the basics and add more functionality as I determine a need

Can I adapt? I’ve only had a couple weeks of full time use with the CadMouse.  A typical mixture of work applications, Outlook, Excel, a little Photoshop and some long days of SOLIDWORKS & DraftSight.

With so many years of using the Trackball, it took a few days of use for me to stop hanging my thumb in mid-air.   The M570  angles away to the right, as well as rounding off at the front.  Far more pronounced and at a  far greater angle than the CadMouse.  This shape rolls your hand over to the point where the side of your little finger and the back portion of your hand rests on the table,  This then naturally positions your thumb, slightly left and to the top three quarters of the ball.

I should point out at this stage that my hands are pretty much square! The palm of my hand measures approximately 90mm x 90mm (3 1/2″ x 3 1/2″).  There was never a option of being a concert pianist with reasonable square fingers as well (not to mention the whole lack of musical talent)

With the CadMouse being flatter I have found it is best for me to position my hand more toward the back and slightly behind it.  This allows me to hold my fingers straighter along the mouse and more directly over the three buttons.  This allows me to lightly grip with the tip of my thumb into the scalloped cut away just below the side buttons.  Whilst on the other side, the full length of my little finger lightly grips the mouse. 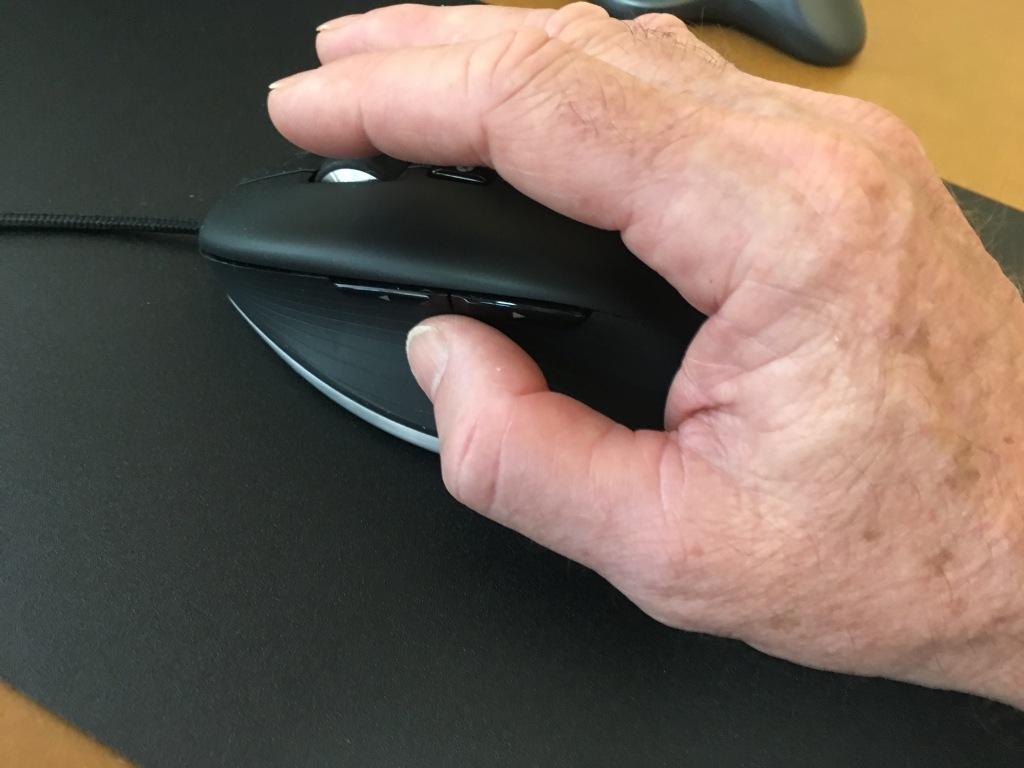 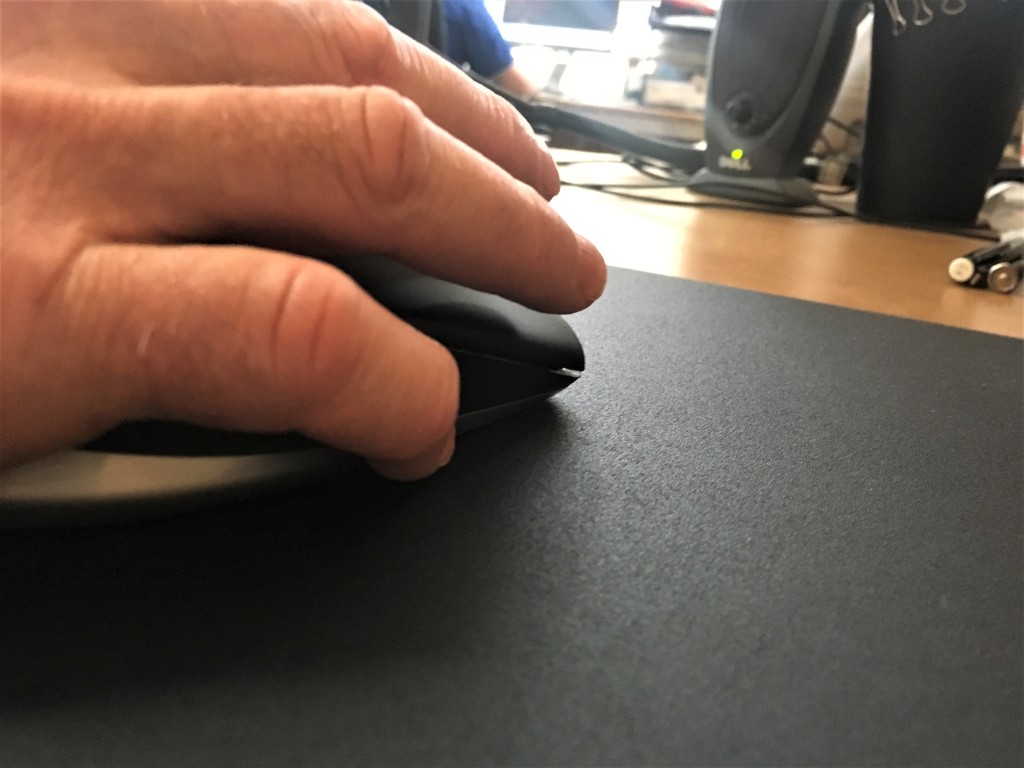 I find I need only the lightest of moment and it is more of a pivot of the wrist, at most times to position the CadMouse.  The combination of the PTFE feet and the CadMouse Pad makes any movement effortlessly.   I doubt you would find any mouse/ mouse pad combination that guides as smooth as the CadMouse with 3Dconnixion pad.  It is near friction less.

At this stage, at times, I’m still having to make a conscious effort to think what I have to do with the mouse.  For some reason in DraftSight I still occasion select the middle button and not the right button for accepting the command.  No doubt too many years of selecting with the middle finger.  Although the same action, hold middle mouse, makes Panning so much simpler.

The other hardest habit to break, or to at least adjust too, when using a mouse has been in PhotoView 360.   Using Shift+Middle button (Scroll wheel) to Zoom or Ctrl+MB (to Pan) I need only use the smallest of thumb movement on the Trackball to manipulate the model.  At this stage after selecting the middle button, of the CadMouse, I need to make a very conscious effort to move it forward or aft!

Overall I’m having less trouble adapting than I anticipated.  I feel after a few more weeks of daily use, it will no longer require a conscious thought process.    I must say I do like the precision, feel and near friction less movement of the CadMouse.

Does this mean I’m going to convert back to a conventional mouse?   The jury, at this stage, is still out on that!  But if I was going too, it would be to use a 3Dconnexion CadMouse in conjunction with CadMouse Pad

In a perfect world I can envisage a 3Dconnexion CadTrackball

3 responses to “Can I go back to using a Mouse? – 3Dconnexion CadMouse #3dconnexion #SOLIDWORKS”