That’s was now I finished my post on my look at the msi WS60.   It was at the time just a tagline to finish the post but one that the kind folk at Micro-Star International (msi) took seriously.  With the release of the msi WT72 Mobile Workstation and the first of the products arriving in Australia I received an invite to have a closer look at the product.   One again I was pleased to accept. 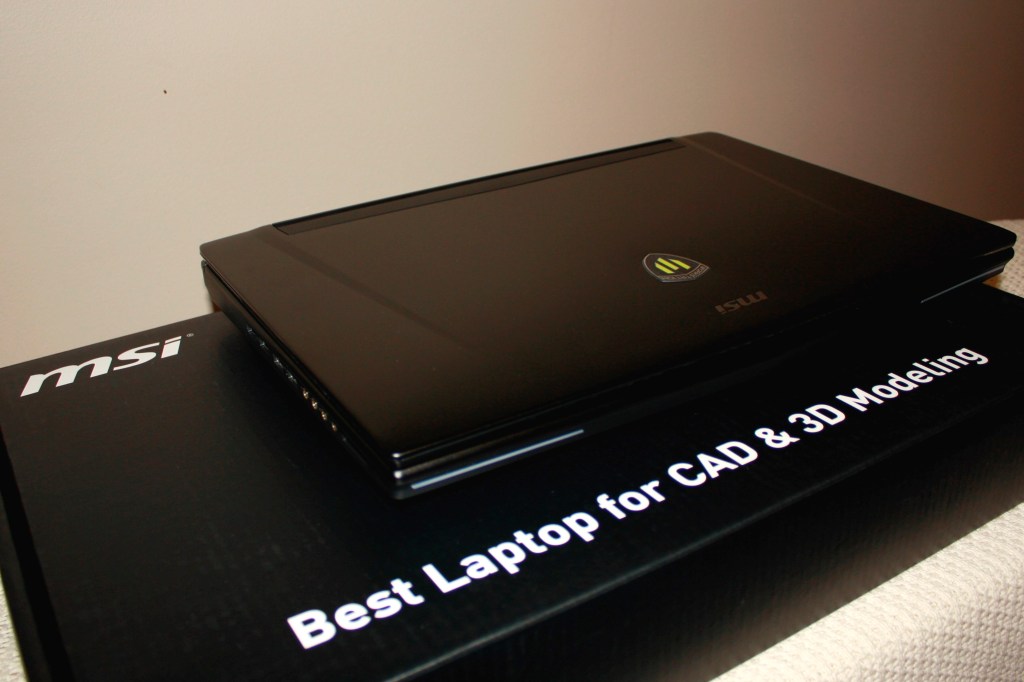 The WT72 arrived with the following specifications:

The Left Hand side is fitted with 4 x USB ports.  The rear two USB are 3.1 (these are twice as fast as the 3.0 ports up to 10Gbps)  The WT72 is one of the first (certainly that I have seen) to fitted with the USB 3.1 ports.  With 3.1 External hard drives expected to be on the shelves any day now this will have to be a bonus for “contractors’ (and those would like to keep “projects” on separate drives) with the ability to work direct to a portable drive.  The two remaining ports are 3.0 with the forward one “supercharged” to allow faster power charging of “Apple” devices when the notebook is in “Power Off”mode.  Forward of the USB are the Audio connections of Headphone, Microphone, Line In and Line Out

The right side is fitted with two more 3.0 USB along with an Optical Drive.  I had the opportunity to sample the Optical drive by watching a Movie (Avatar – on Blu Ray) one night (always product testing 🙂 ), when my daughters took over the lounge and I was sent to my study!   It is quite a bonus on a professional system with the quality of the screen and the sound provided by the Dynaudio speakers which includes a sub-woofer! 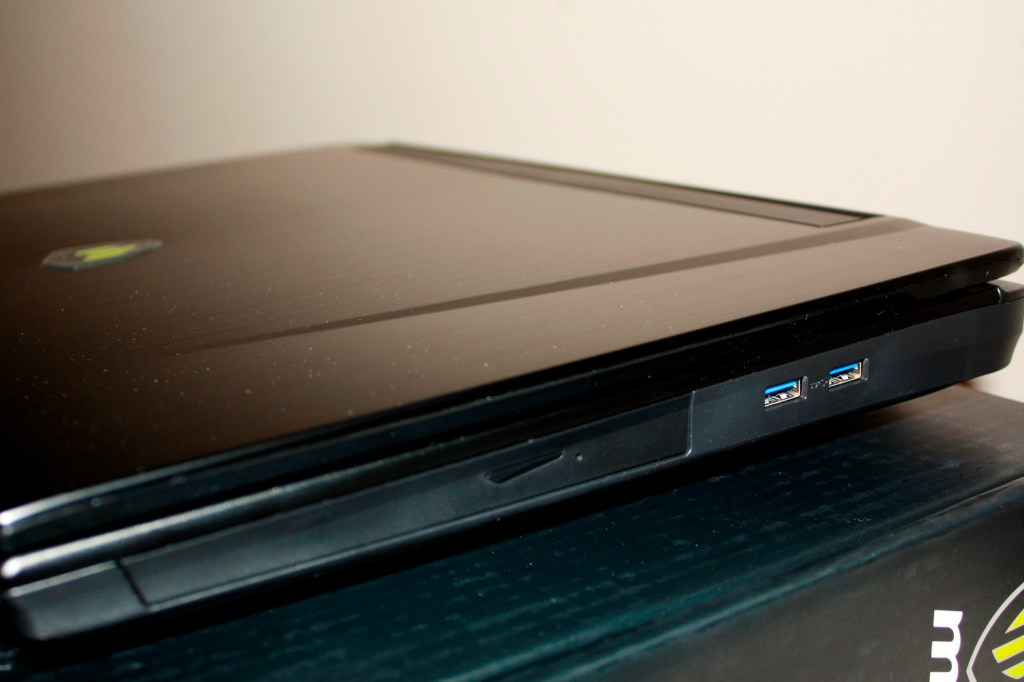 The rear is where the connections for the power supply and the network (RJ-45 connector) are located.  Along with 2 x Mini DisplayPorts and a HDMI  connection.   I do like having the connection for the power and network at the back.   I would think in the majority of cases most people have cable coming up from the back of there desk.    It is also nice to have a clear working space free of cables either side, especially when you add in the use of wireless mouse /trackball 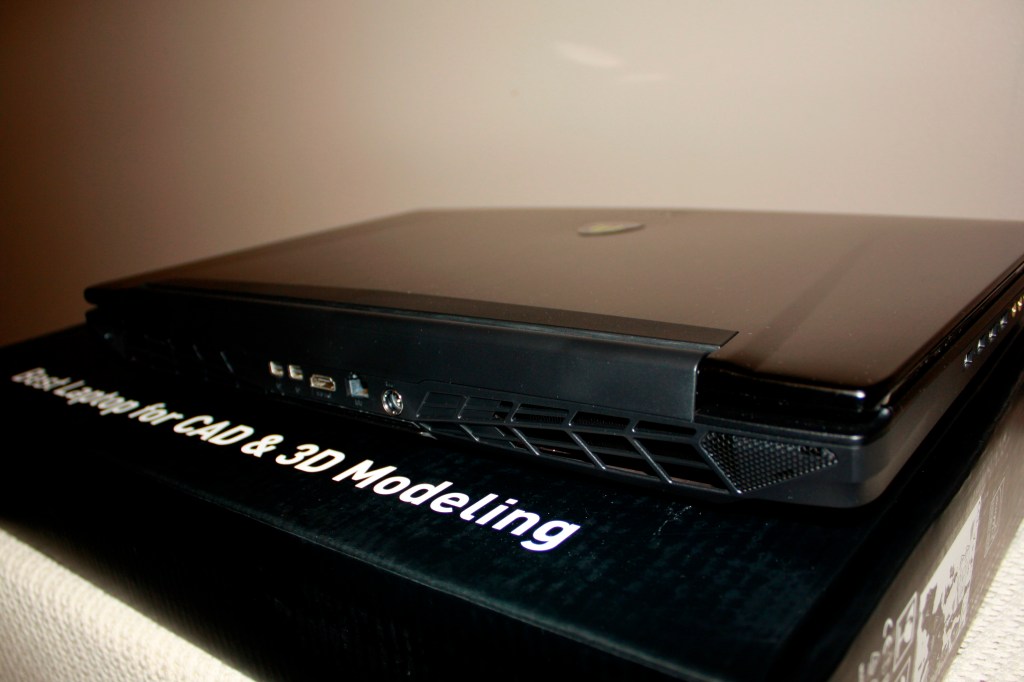 As much as the WS60 and the WT72 are two very different mobile workstations they do share a few nice features.   As well as the before mentioned Dynaudio systems they also have similar steelseries keyboards.  The more I use the more I like the feel and feedback of these keyboards.  I’ve previously mentioned with the WS60 that I do like the type of font used on the keyboard and the adjustable back lighting system.

The Keyboard face (RH side) sees the location of the Power Button.  Below that is a button for the “Graphics” which allows switching between discrete or UMA GPU  modes (with a reboot) Something I never seen before in regards to having a button and I’m not sure why you would use often beside the need to save battery power).   Below that is another interesting feature, a button for manual override (of the Auto Mode) to set the cooling fans to maximum.   This is followed by the Keyboard LED Manager and a programmable Button to launch a particular Application 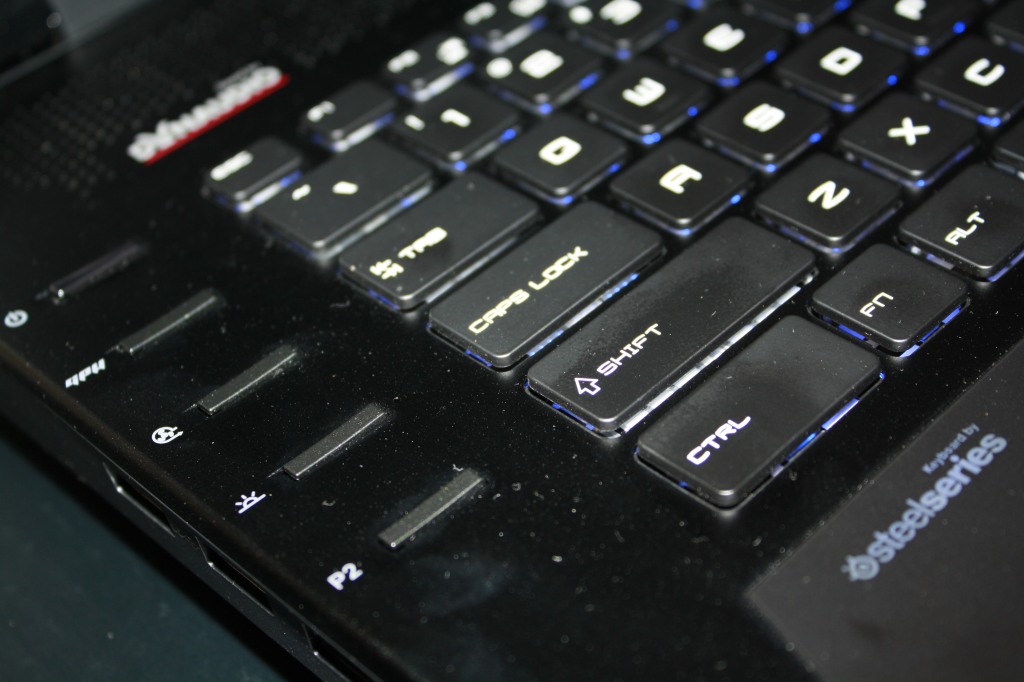 Whilst the looks, styling, features and specifications are one thing on a workstations most would agree it is about performance.   So lets have a look at a few Benchmarks and a couple of practical applications.   For the sake of comparison I ran all the same benchmarks and files against my IC3D custom built desktop  (Intel Core i7 – 4790K Haswell Overclocked 4.3GHz – Liquid (Sealed system) Cooled processor) and have also used some comparisons from the previously reviewed msi WS60 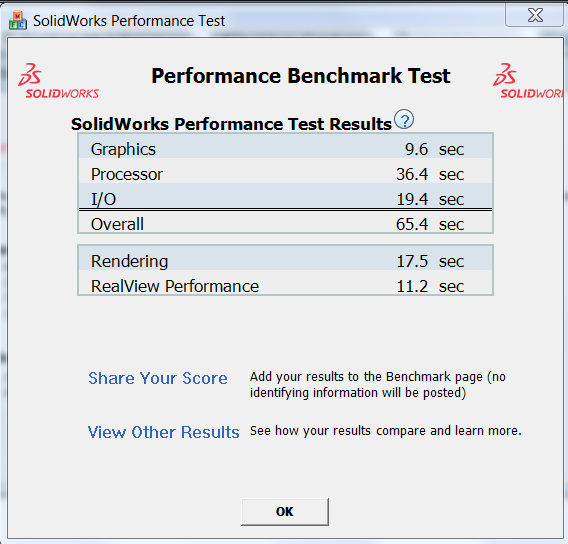 By the way of comparison this is my IC3D  Intel Core i7 – 4790K Haswell Overclocked 4.3GHz

Moving on to some move practical application I ran the Rendering Benchmark (by Rob Rodriguez – Axis Cad Solutions ) “Speaker for Render Benchmark” which can be found on Charles Culp – SWtuts site.  We see the WT72 (top image) producing the Render in 4minutes-43seconds compared to the IC3D in 3minutes-22seconds.  Although that in percentage terms is an increase of 40% you would happy to see those times to run a  render.

I was interested to see if that percentage figure would change much by running a few different renders.  Dragging out my old Chess Set and setting up a render with a little more demanding reflections  (and playing with some Camera focus).   The WT72 (top image) produce the below Render in 10minutes-57seconds whilst the IC3D produced it in 7minutes-6seconds.   Which is a percentage increase of 54% but again it’s a time you would be comfortable to use. 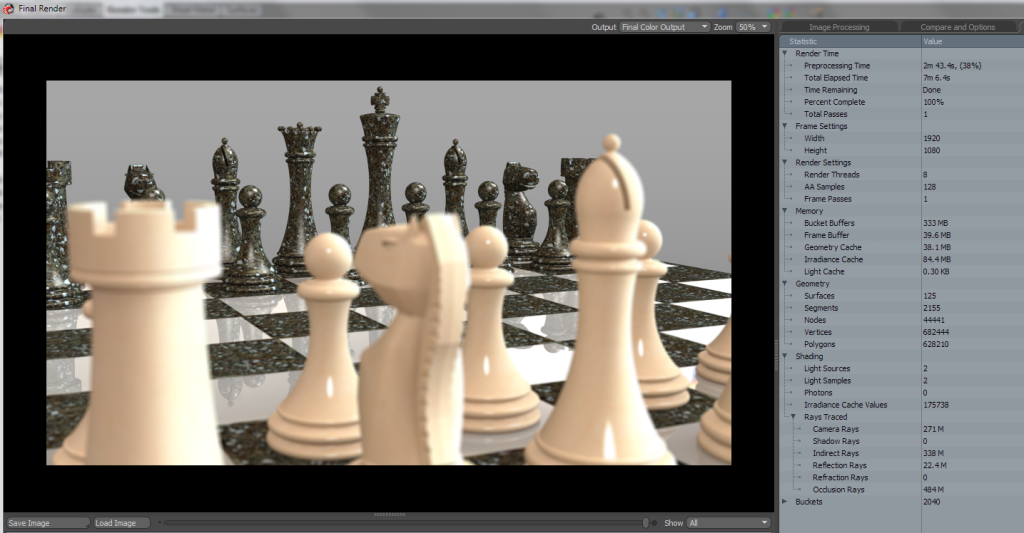 When I looked at the WS60 I used Mark Biasotti – Porsche Carrera GT ( SolidWorks Doesn’t Do Trains Planes and Automobiles ) to see what opening times were achieved.  The Porsche is a reasonably small size assemble of 25.6MB Assembly with a 170 parts.  The WT72 consistently opened the Assembly in 22.16 seconds whilst the IC3D took on average 27.53seconds.   Yes that is 5.37second faster! (an a increase of 24% for the IC3D)    I’m assuming that you would put this down to the Intel Turbo Boost with the processor running at maximum speed (it did hit 3.6GHz but my finger and the screen print ran a bit slower)

After that impressive performance it was time to put it to the test.  I have this little filter which is only a small part – 6.38MB in size but Linear Patterns, Mirroring of Patterns and then applying Fillets to those features are always taxing on rebuild times!  The WT72 (top image) took 334.84second.  This part even gives the IC3D a reasonable hard time taking 287.78seconds (a different of just 16%)

Whilst the trend might be for smaller and lighter systems it is hard not to like using a 17.3″ Laptop (as I type this up on my own non-CAD 17.3″ Laptop)

Even with only using the msi WT72 for a reasonable limited time there is much to be liked and impressed about by the msi WT72 .  The specifications are as good if not better than what is being offered with comparable system.

If you are in the market and have the need for a professional CAD mobile workstation then you should at the very least consider the msi range of laptops and put them in the mix before making any final decision!

Contact you local msi dealer for further information on model range and price.