SOLIDWORKS WORLD 2017 IS LESS THAN A WEEK AWAY!

Just 4 days, 13 hours, 8minues and a scattering of seconds. as I write this!

In real terms I have just three more days of work before I fly out mid-Saturday morning (Sydney Time).   With the miracle of time zones I manage to arrive at LAX 5 & quarter hours before I leave! (6:15am Saturday)

This will be my seventh SOLIDWORKS World.  My first, only having to catch one flight!  It’s still a solid 14hours.   I wont miss the mad dash from the International Terminal and getting back into LAX Domestic Terminal to catch a connecting flight.   Despite passing through LAX some 9time previously it will also be the first time I’ll get to spent more than 24hours in Los Angeles.

The SOLIDWORKS Community is diverse and cuts across all nationalities.    Age and gender are no barriers and it in compasses people from all walks of life.   I was fortunate early this year to share a few of my thoughts with SOLIDWORKS about it’s Community for their SOLIDWORKS is Everywhere video series 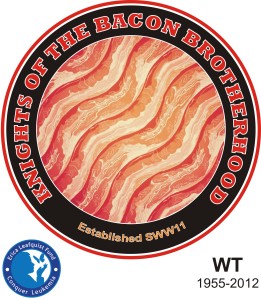 What started out as just a laugh has developed a human side as well, with the support of a couple of worthy causes.  Sales of “Knights of the Bacon Brotherhood” tee shirts supports American Cancer Society in memory of Wayne Tiffany and the Erica Leafquist Fund (Dana Farber Cancer Institute)  Be part of the Brotherhood!

As with all Worlds my calendar has barely a blank space available from the Saturday through to the Wednesday.   For some reason it’s seems even busier.   Still there are some  firsts!   This year I get the chance to participate in a couple of User Feedback sessions.    A few years back now I signed up for the User Research Program.   A good way to provide input into possible future directions that the software may head.  I do the odd survey and online feedback and yes I’m partly to blame for the User Interface change with SOLIDWORKS 2016 and YES I still prefer it 🙂    I’m looking forward to the Feedback Sessions.

Most of all I’m looking forward to catching up with the many friend, from the SOLIDWORKS Community, I have made over these previous Worlds,  Along with making many new ones!