I was fortunate to be able to attend the SOLIDWORKS 2017 Live Launch Event on the 20th September 2016 – Foxborough, Boston.

This was the first time I’ve been able to attend and I have to say, I was unsure what to really expect.  As it turned out it was not quite what I had expected from the event.   It was, however, interesting, informative and entertaining.  More like the 3 days of General Sessions at SOLIDWORKS World condensed into a single intense day!

I got a little side tracked after the event.   I spent an extra week or so looking around Boston & New York and have been playing catch up ever since then.   As I’m behind providing current information on the event I thought I would just added some images and a few comment to the SOLIDWORKS Blog

Italic words are taken  from the SOLIDWORKS Blog:

The best and most passionate CAD community in the world assembled today in person and online for a first look at SOLIDWORKS 2017. CEO Gian Paolo Bassi was joined by executives Suchit Jain, Kishore Boyalakuntla and Kurt Anliker, along with innovative users Myomo, Chairslayer, and RunnitCNC, to introduce SOLIDWORKS 2017, talk about the future of design and share results of breakthrough engineering projects.

I don’t really know Gian Paolo Bassi, I’ve meet him a couple of time, basically an introduction and to say hello.  There is no doubting his passion and stage presences when he is talking about SOLIDWORKS and the SOLIDWORKS Community.  I don’t like to stereotype people but with his Italian heritage he is all passion, energy and movement when on stage! A few images that capture that passion 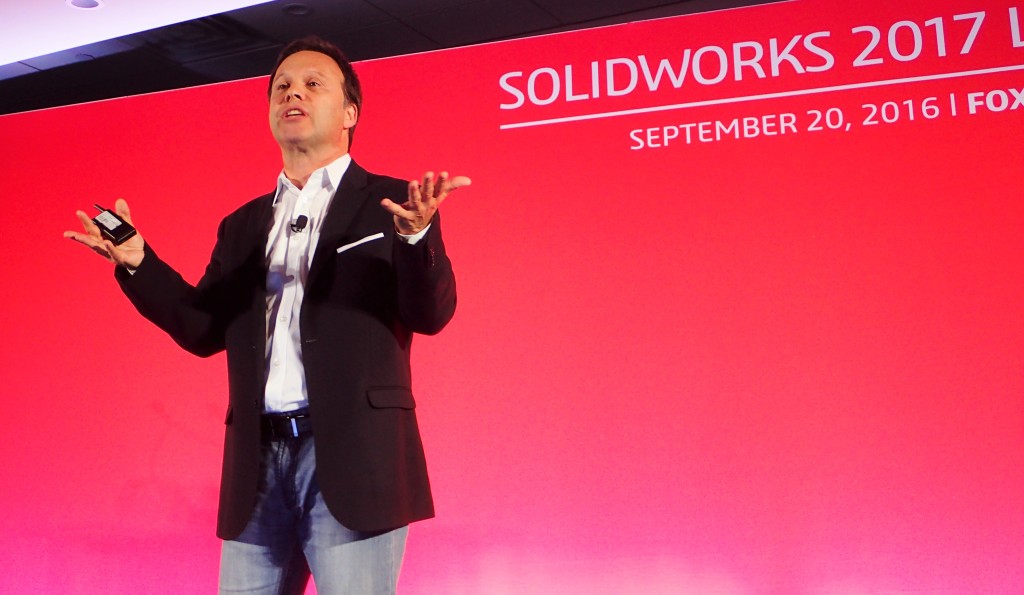 In addition to the product roadmap and SOLIDWORKS 2017 updates, the event also discussed the power of the SOLIDWORKS user community. Suchit Jain, VP of Strategy, Business Development and Community.

Suchit also provided updates on the SOLIDWORKS for Entrepreneurs program, which currently includes over 200 hardware startups working on everything from app-enabled robots to supersonic passenger jets. This commitment to startups also manifests itself into partnerships with more than 60 business incubators. Another way SOLIDWORKS is helping to lower barriers to business and engineering knowledge is through its partnership with the Fab Foundation.

Some of Suchit presentation first aired at SOLIDWORKS Worlds.  There was some updated information on Fab Foundation. and he talked enthusiastically about the Experimental Aircraft Association 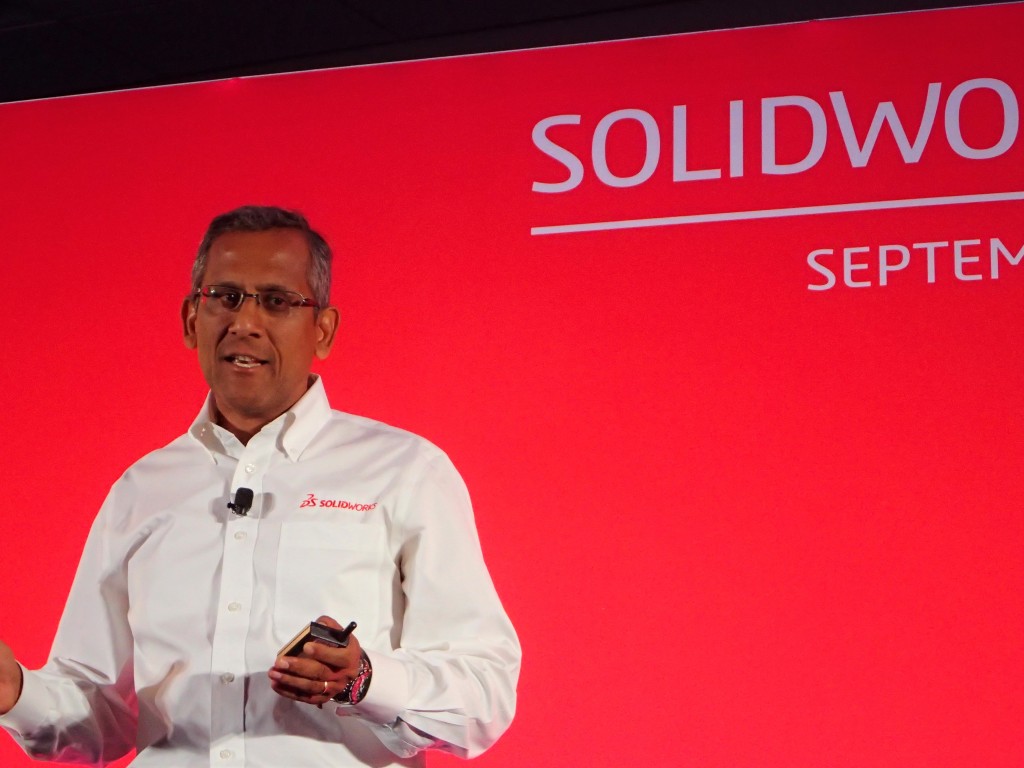 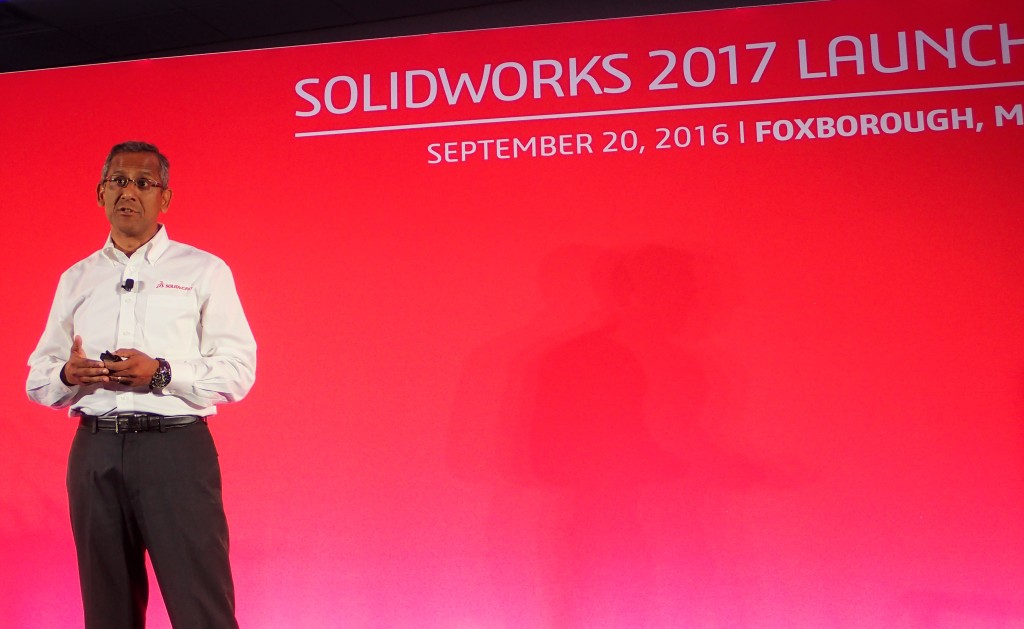 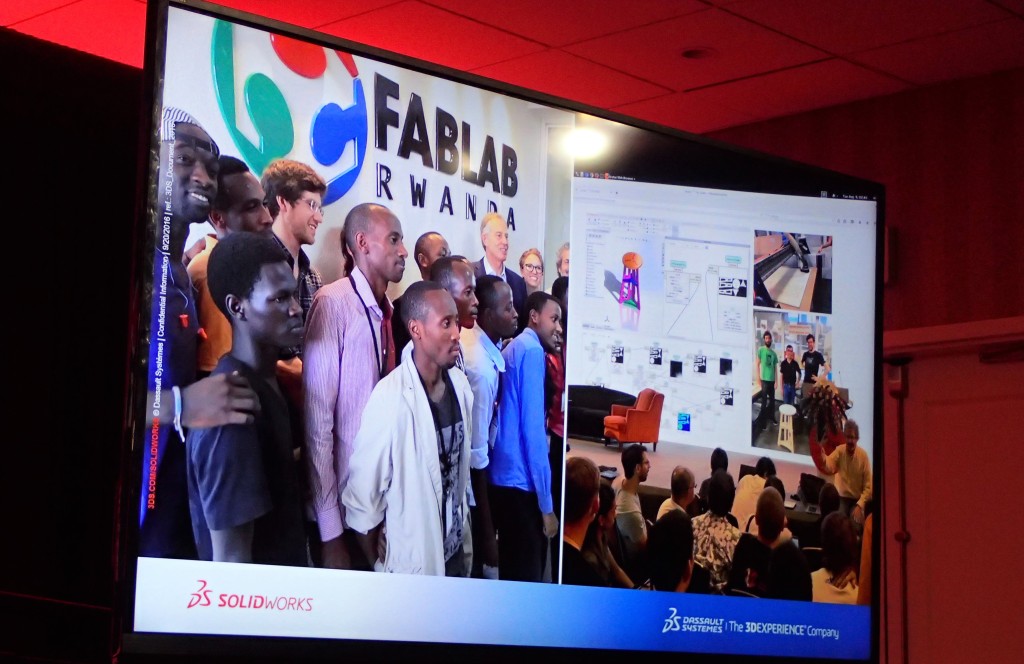 These students are moving on to join the engineering workforce and are responsible for amazing products, such as Freight Farms and Myomo. To get an even younger audience interested in STEM, Suchit shared details of the SOLIDWORKS Apps for Kids Beta program, which allows kids to capture, shape, and style their ideas from concept to reality.

For SOLIDWORKS, this power translates to simplifying and streamlining the product design process onto one platform. This means connecting with manufacturers, like Xometry, for rapid fabrication in a matter of clicks or providing real-time personalization with SOLIDWORKS Make. 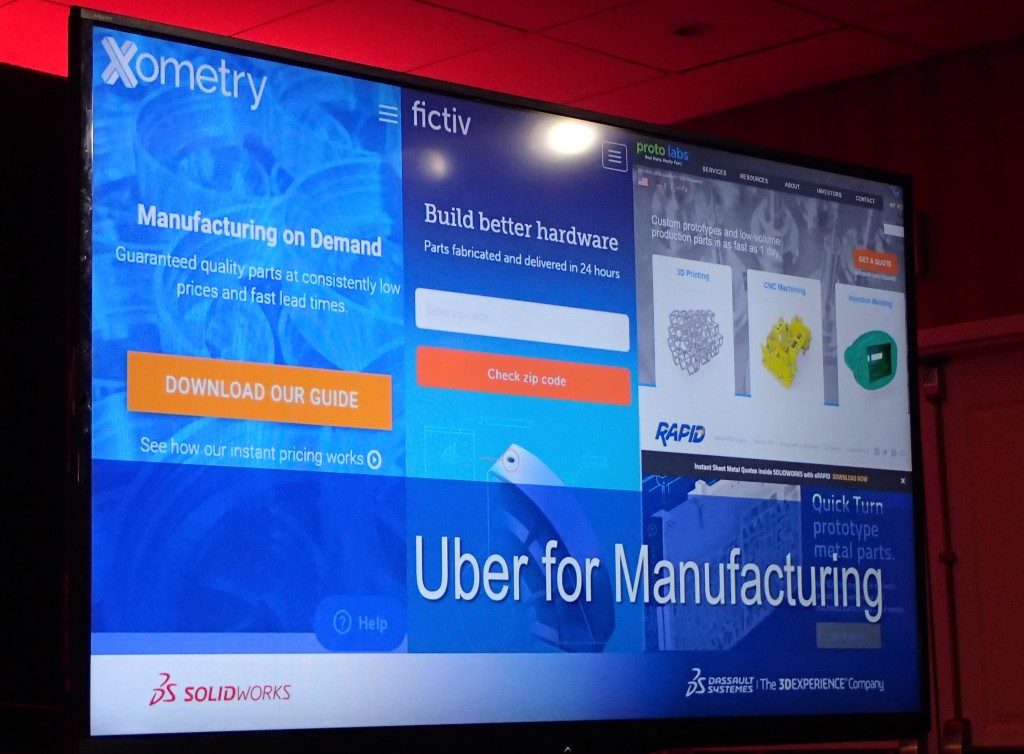 In the afternoon Xometry  were featured on stage along with Renishaw, Markforged & Stratasys to talk the Future of Additive Manufacturing

To show his multitasking skills  Dan Herberg downloads the Xometry addin for SOLIDWORKS during the presentation and receives an instant quote during the discussion! 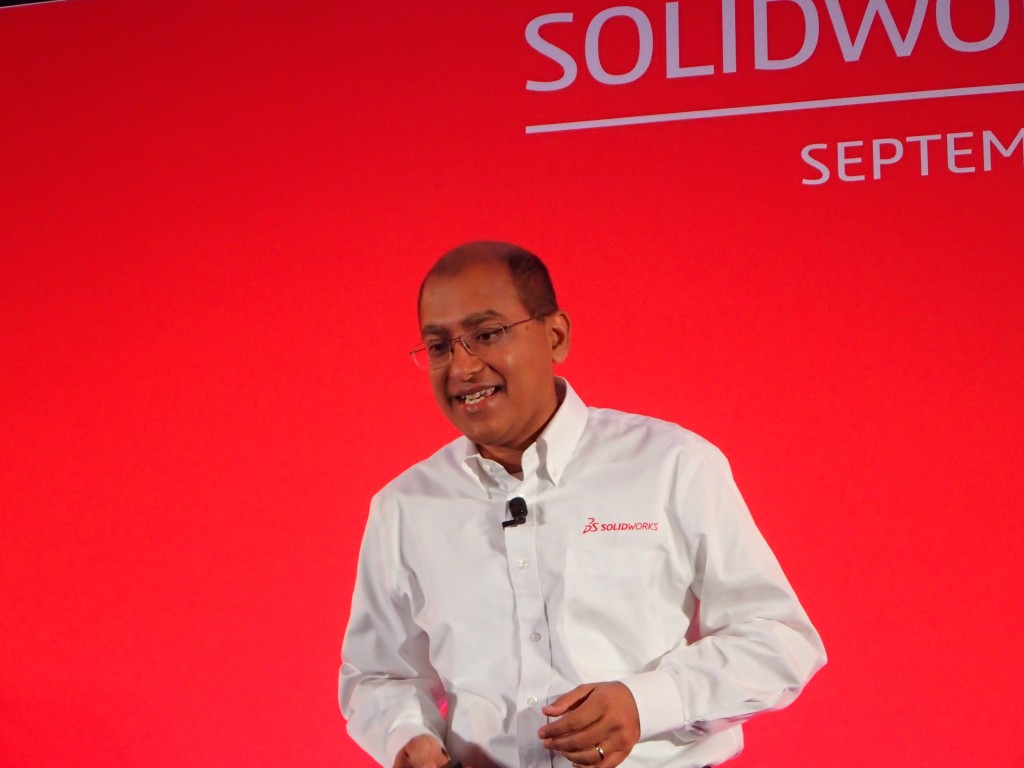 However it was the next two items from his presentation, that most attending were most interested to hear about.

First 3D Interconnect, the ability to open native files Autodesk Inventor, PTC, Solid Edge, NX and Catia V5 directly in SOLIDWORKS 2017 without the need for translation!    There are a number of limitations in regards to which versions from those programs that can be used.  These versions are shown on the image below.   Overall it looks to be a tremendous new feature.  It was not available during Beta to test.  It has now been included in SOLIDWORKS 2017 Pre-release and needs to be selected to use.   Options>System Options>Import> Change File Format to Inventer/Catia V5/Creo/NX/Solid Edge

There is one small and slightly disappointing BUT!  Its a sales thing I know and it is their product and I know we users of the SOLIDWORKS product want everything.   BUT why is the ability to open Catia file only available for Premium users!   It’s Surface Flatten all over again!  Every version of SOLIDWORKS has all the Surfacing tool available with the exception that you need Premium to have Surface Flatten!   Now we have the ability to use all of SOLIDWORKS major competitors data BUT not the parent companies files!  Without having Premium!  Is it just me, or does the meaning of the word irony appear lost on a few people at Dassault Systemes!   Apart from that one little thing 3D Interconnect is a great new addition to SOLIDWORKS 2017

Possibly the most anticipated information was with Term Licensing!  Terms were announced as three (3) and twelve (12) months.  Along with that Term Licensing would be available for all versions of SOLIDWORKS and SIMULATION products.   Apart from providing a cost for SOLIDWORKS Standard – $225 per month, not much more information was provided.  No costs for the other products, no information on how to arrange Term Licensing!  Then the kicker, at this stage this will only be available for the North American.  I’m a little surprised at the lack of information.  We were first informed of Term Licensing at this years SOLIDWORKS World.  Some eight months on I would have thought they would have been keen to share more.  Maybe they are saving that for the VAR’s Launch events (in the USA) over the next month.

UPDATE: There is a very good detailed post on Term Licensing on the CAPINC Technical Blog.  It details costs for all products available for Term Licensing.    As well as supported argument on who or why you should use Term Licensing! 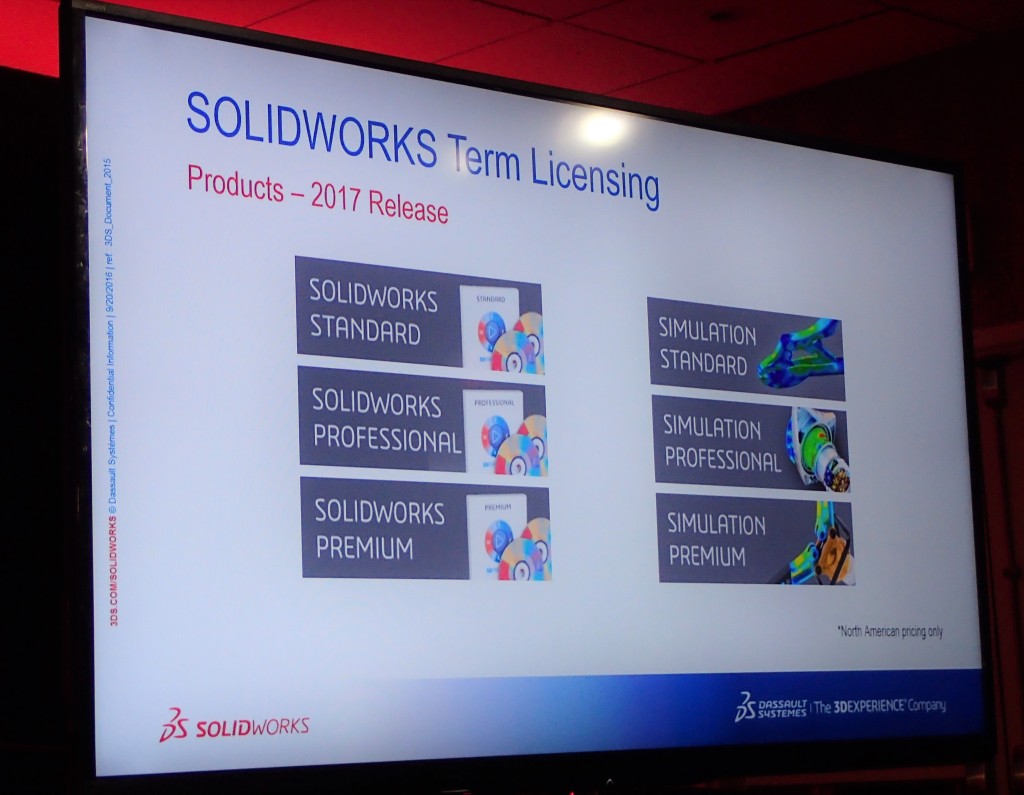 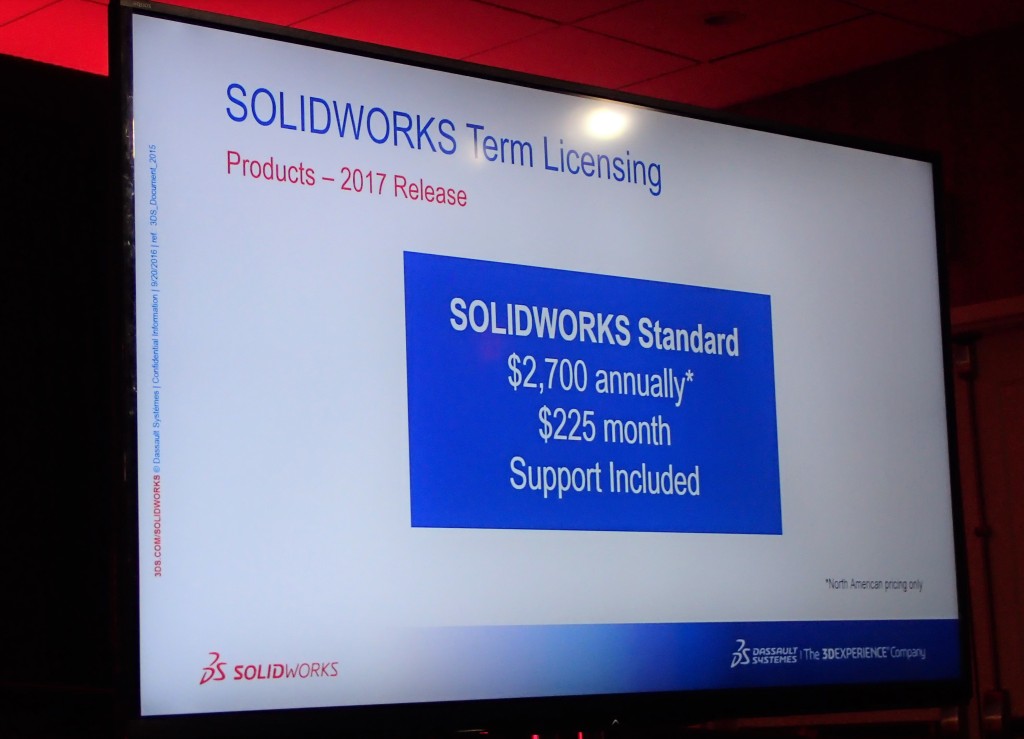 SOLIDWORKS have based the demonstrations of SOLIDWORKS 2017 new features around a product from Myomo.  Kurt Anliker introduced Andrew Harland Principal Mechanical Engineer at Myomo, who discussed his company’s evolution and the design of its flagship product: the MyoPro® myoelectric upper limb orthosis! 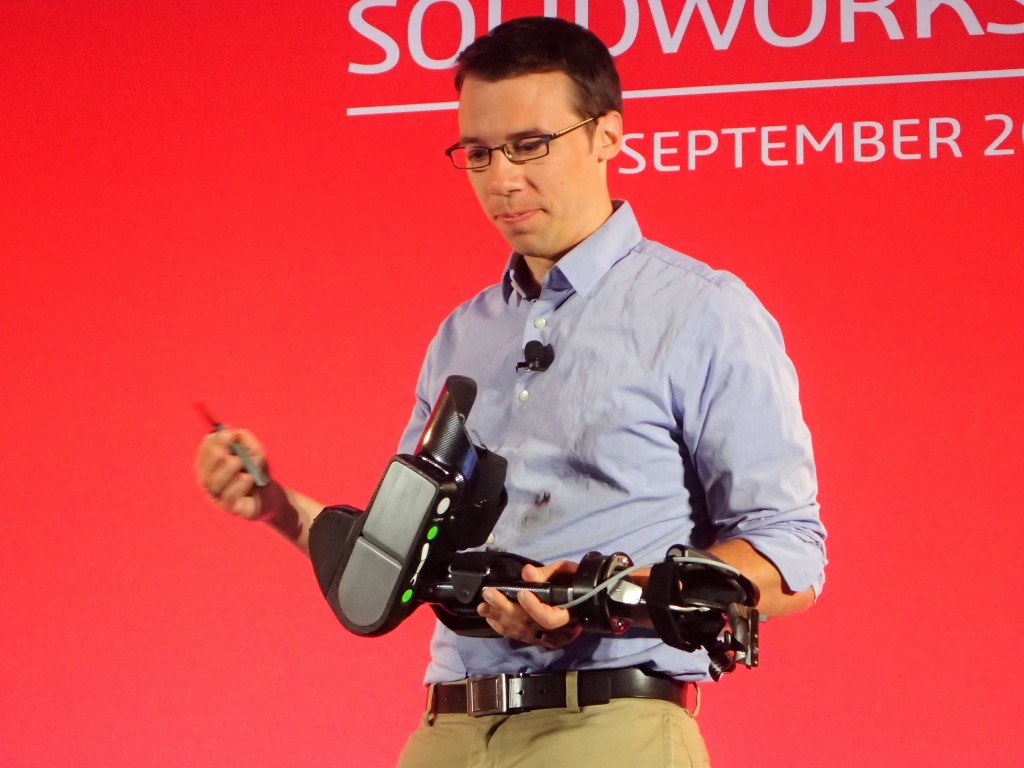 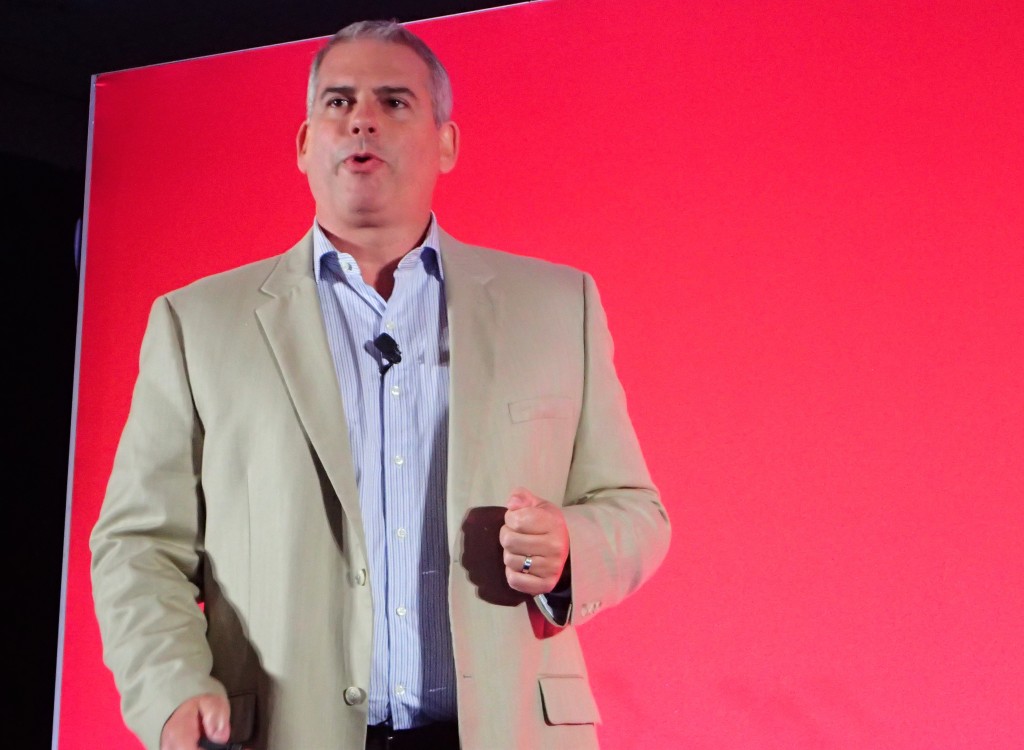 Finally, users Rob Parsons of Chairslayer and Andy Blood of RunnitCNC shared their inspirational stories along with their passion for fast cars and dangerous things. Rob was paralyzed during a dirt bike crash and Andy was similarly injured in a work accident. The two have since connected and are revolutionizing the world of racing and how people with paraplegia are getting back behind the wheel with Rob’s custom hand clutch system and Andy’s manufacturing work. These are the users who fuel innovation. Their power to transform what life throws at them into truly world-changing ideas is what drives the SOLIDWORKS community. 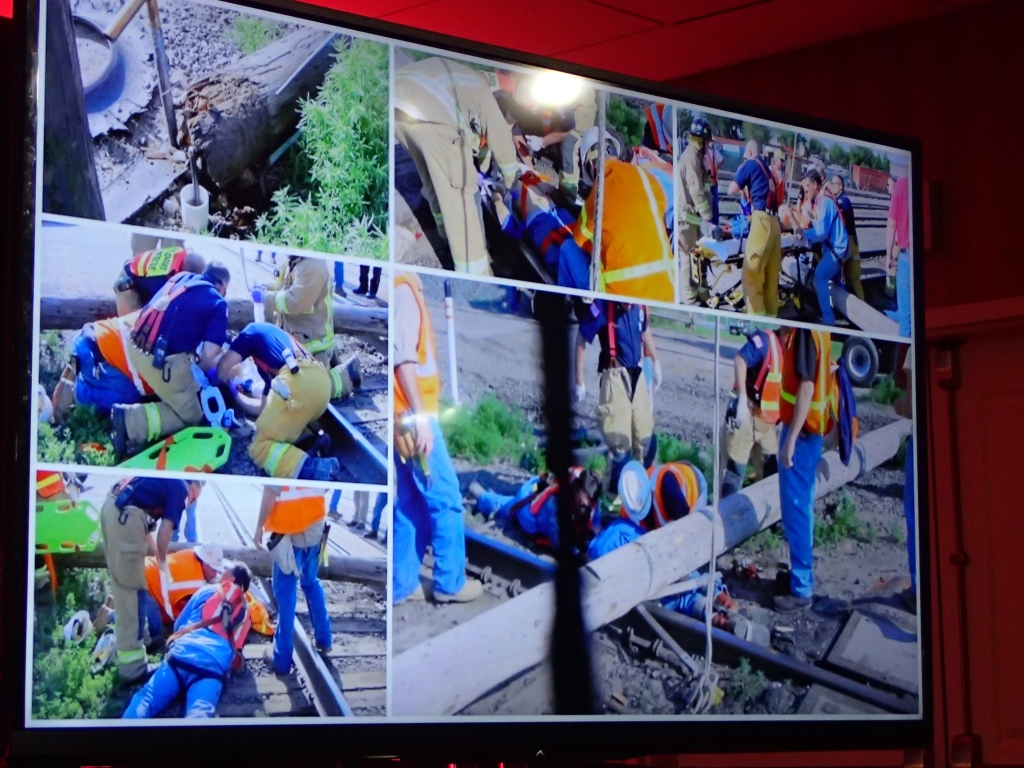 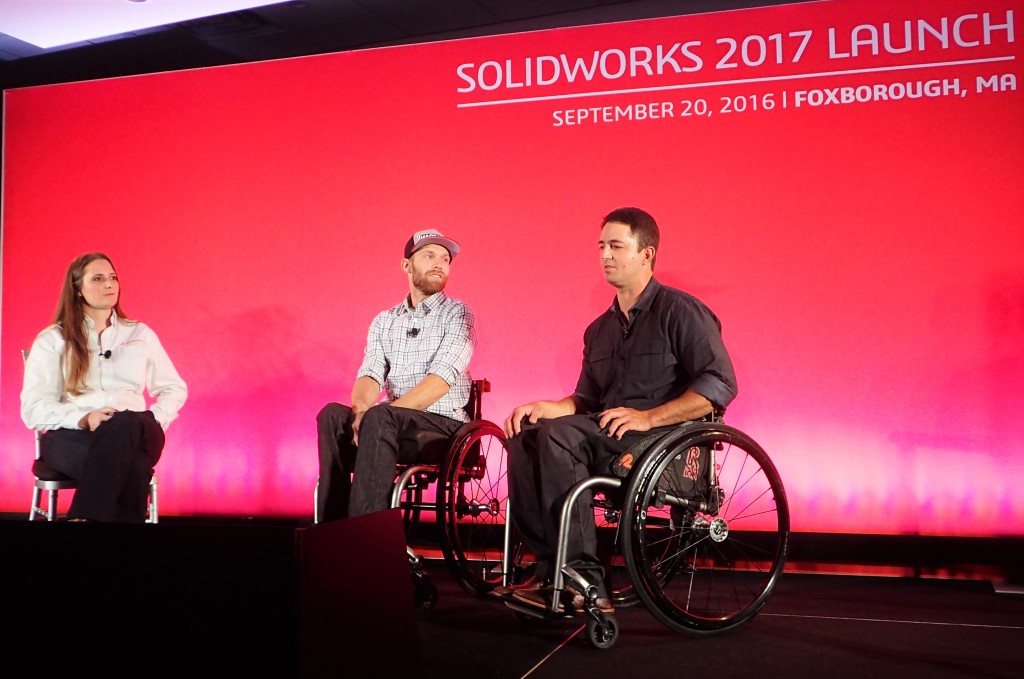 It was certainly an interesting day.  By now most would have received invitation from your local VAR in regards to their own Launch events.  Where you can see SOLIDWORKS 2017 discussed in greater detail.  I attended my reseller event yesterday.   For more information and to register for a Launch event can be found by selecting the link